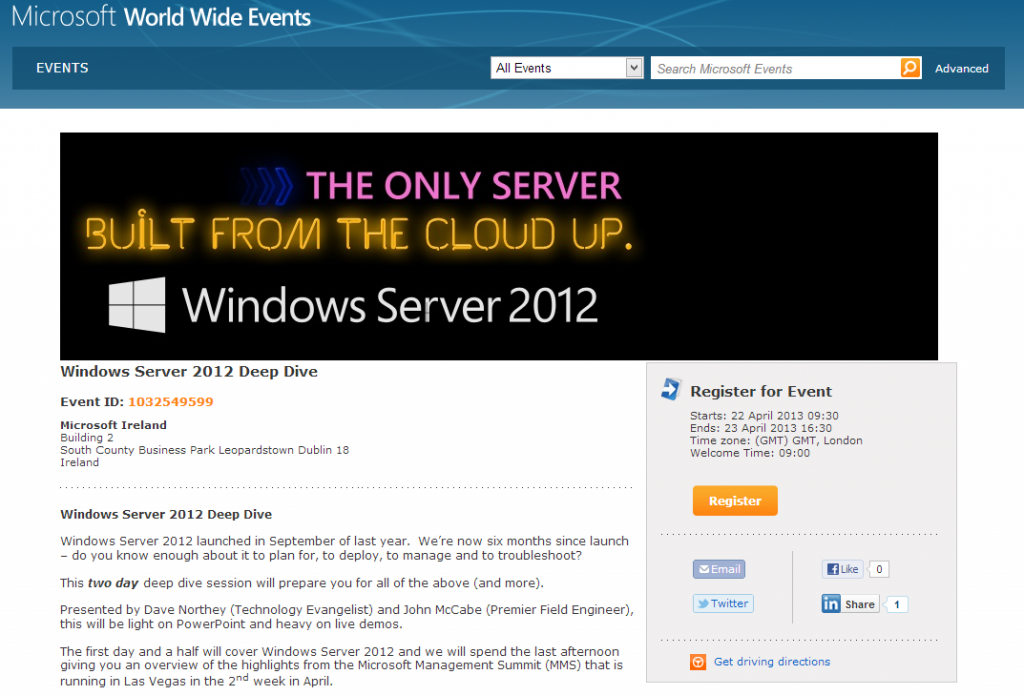 The day started with a general summary by Dave Northey (@ieitpro), followed by (my favourite) session on storage, presented by Aidan Finn (@joe_elway). After lunch John Mc Cabe (@mccabej) ran through improvements in Server 2012 networking, and the day concluded with a session about new features in AD by Andrew Lomakin.

I’m not going to write a full report on the session, they have been recorded anyway and will be probably published shortly. It’s more of a collection of tidbits that i thought to be worthwhile noting.

Maybe not a breaking news for most, but thought might be something to bring to attention again. In case you are not sure what Extended support means, you can find more information in this Microsoft Support Lifecycle Policy FAQ.

Of course this made me curious and had to check it out. First had to check the physical sector size. Let’s fire up Powershell. The command to use is:

This command will list the sector sizes for all disks. If you want to get more info about a specific drive, you can us the command (for disk number 0): 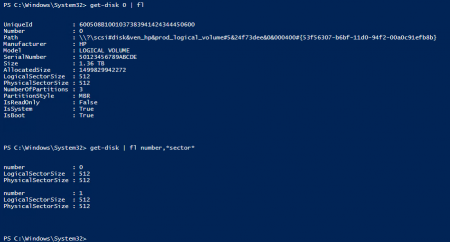 As you can see, the physical disk is using 512B sectors. Once we know this, we can check the properties of a VHDX file, again using Powershell and the command:

And just for the fun of it (and for future reference), we can try to create a fixed size VHDX file with 4KB sector size:

After a while, the result will look something like this: 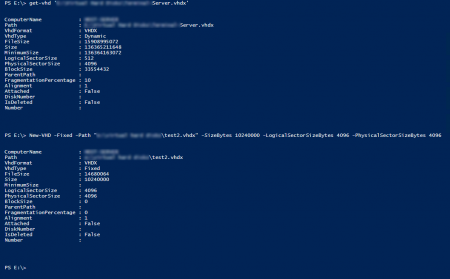 Apart from the (more less) well known advances in Server 2012 storage, the details that were most interesting to me were the information on on different mirror “levels” and something called SES for storage enclosures.

When we talk disk mirrors, we usually imagine 2 drives having the same copy of data. In storage pools, you can have 2-way mirror, which is our standard 2 disk mirror. Or you can have 3-way mirror, where the information is written in 3 copies, and thus this setup can tolerate two disk failures.

SES came to light in relation to hot spare disks on JBOD configurations. SES is a protocol used mainly with disk storage enclosures. It’s used to provide non-data information to computer – amongst others the disk status. For the hot spare functionality to work properly, SES version 2.1 is required. That will allow the storage space to recognize that one of the hard drives is not available any more and initiate it’s “replacement” with a hot spare (if such is configured of course).

Another “free” feature in Server 2012 is data deduplication. The type of data it can be used is limited – it can’t be used on live databases, virtual drives, etc., but is great for archives, VHD libraries and so on. If you want to check if it would bring any improvement in available storage, you can install the Deduplication feature under File Server, and than from the system drive, e.g. C:\Windows\System32, run the DDPEVAL.EXE command. This should give you an idea on how much space you could save by implementing dedupe.

Something i wish i knew a few months back – Managed Service Accounts. These are special accounts with network permissions, that have self-managed passwords! That means you don’t have to remember/change the password to setup a service that requires network access. This feature has been apparently available in Windows Server 2008 R2, but has been largely improved in Server 2012.

Sometimes you might be asking this question yourselves. But in this case, if type in a command line or powershell CLI, it will return information on user account you are currently using. In basic mode it will return the domain/username, but has many switches to extend the information it returns.