Since Microsoft has decided to annoy all small business IT admins by discontinuing the Windows Small Business Server (SBS) product line, it’s time to look in to what to replace the good old SBS with. To be more precise, what form of messaging system to use. There might be some who might replace Exchange with other 3rd party solutions (non-exchange) based, and than there are those who require the functionality of Microsoft Exchange.

For the purposes of this comparison i made a few assumptions, so bear this in mind when considering the information in this article. First of all, i assume we are talking small businesses, e.g. 2-25 users. Next assumption is that both solutions require some sort of server on-premise. In this scenario Windows Server 2012 Essentials would do a great job, since it is licensed for up to 25 users. The cost of the license for the Windows server is considered in the total cost as well.

What we are looking at is a total cost of both solutions, depending on the number of users and projected number of years for the solution. Let’s jump straight in and look at a 1 year cost projection. 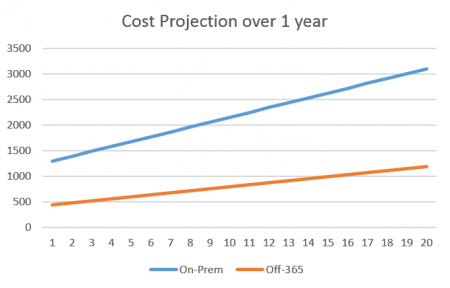 In a 2 year projection, the increase in cost is much close, as much as we could nearly call it even. The overall cost of on-premise exchange is still higher in all range of users, but at least the growth of cost is more-less the same. 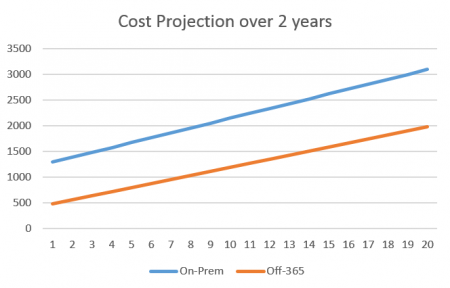 With the 3 year projection things start to get interesting. Again, the overall cost of Office 365 over a 3 year period is lower compared to on-premise solution, but the growth rates have swapped, and the increase in cost of on-premise solution is lower. Hitting the 25 user mark, they are getting really close to each other. 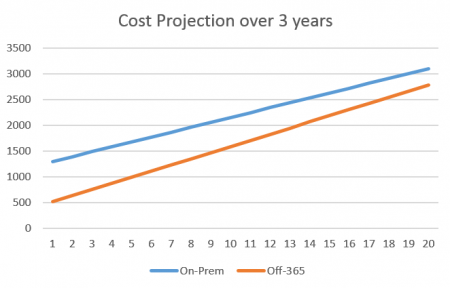 4 years is the time frame where things are changing considerably. This is the first time when the increase in cost of the Office 365 solution goes above the increase of cost of on-premise Exchange. The braking point is somewhere around 12-13 users. 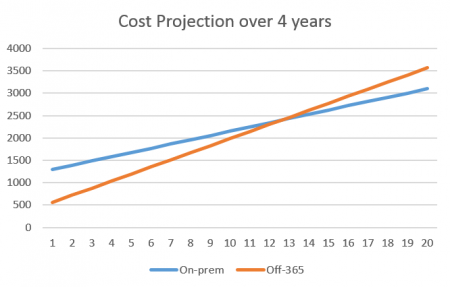 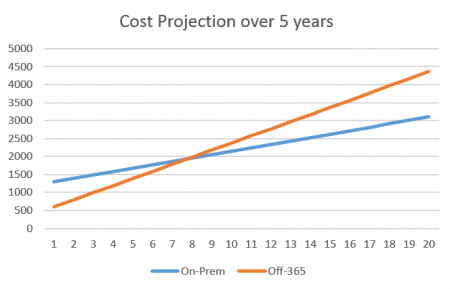 As mentioned before, an i believe this analysis more-less confirmed that there really isn’t the ONE solution. It depends very much of how much you plan ahead, how well you can project the growth of the user base in the company, and so on. There might be other aspects to this debate as well, but for simplicity they were ignored this time.

In this analysis i used a very rough estimates on product pricing. If you would like to check the numbers with the prices you get from your supplier, you can download the Excel sheet i used for calculations:

Notes: The calculator is a fairly simple Excel sheet, all you need to do is change the desired number of users and number of years you want to consider. You can also update pricing as per your supplier. The first tab called Calculator will just give you simple answer in form of Total cost. The second tab will re-do the graphs for years 1-5 base on the updated pricing.