I have been using Windows 8 on my ageing laptop and home workstation as well. There are many nay-sayers out there, but my personal opinion is that Microsoft has finally made something that is new inside out, looks great and works great. Despite not having touch on either of my current computers, i have to say my efficiency in using the new system grew day by day. And even though my laptop was still working fine i started to look around for a replacement, which of course would have to have a touch screen.

After some research, first that struck my attention was Lenovo’s Yoga 13. Seemed to have a great screen and keyboard, size wise was probably ideal and had the option to use it as a tablet (sort of). I kept looking around and after a while i found what i believe is the ultimate Windows 8 device – Lenovo’s Thinkpad Helix.

After a long long wait my new work tool has arrived. 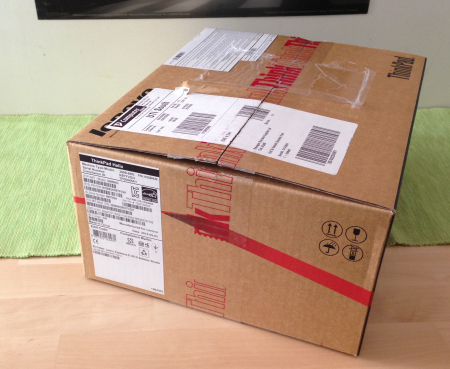 Considering the size of the device I was surprised by the size of the box. When I opened the box, i found the tablet part and the keyboard part packed separately. I went on to putting the parts together. 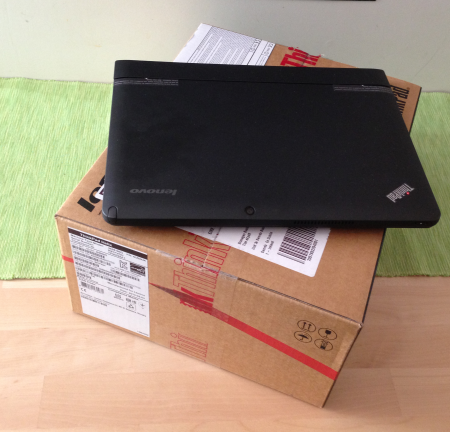 I have to admit, i was a bit nervous about the construction of the hinge that connects the tablet to the keyboard. Once I tried to connect those parts together and take them apart again, all my worries went away. It seems to be well designed and don’t expect it to break any time soon. 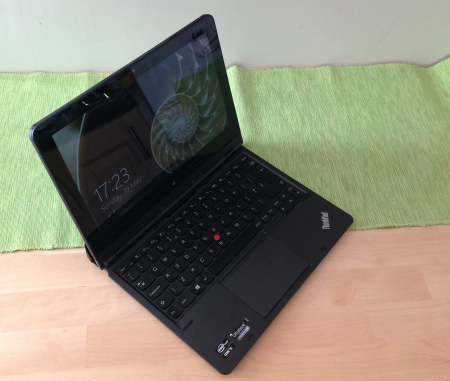 Speaking of the screen, the HD resolution of the screen (1920 x 1080) makes the text really nice and crisp, provides sufficient space no matter what you are working on. As mentioned before, it is a touch screen and complements the UI of Windows 8 very well. With the basic control knowledge from using the older laptop, the touch became second nature very fast. One thing to note is that due to the hinge construction the tilt of the screen is limited to some extent. So far it wasn’t a problem, but there might be very specific cases where this could be a bit, well, limiting.

One of those situations might be using the laptop while it sits in your lap. Again, not a huge issue, just something to get used to. And there’s also a side advantage of the design while you are using the laptop sitting in your lap. Since all the HW is in the “screen” part, the bottom of the keyboard never gets hot and doesn’t cause any temperature related inconvenience.

I haven’t used a Lenovo/IBM laptop before, so can’t really judge how the keyboard compares to other ThinkPad laptops, but personally i found it more than usable. The keys are just right, not too small, and finally i have a dedicated HOME/END PG UP/PG DOWN keys, that i didn’t have on my Sony laptop.

The touchpad is taking quite a large part under the keyboard, it has “hidden” buttons for the left and right and so far seems to be working fine. It’s also multi-touch, so certain gestures, like scrolling etc, work, but i find it more convenient just to use the touch screen.

Now to the party tricks of the laptop – the detachable keyboard. As mentioned before, the construction of the hinge is quite simple and it’s very easy to remove the screen by pressing the release “button” on the left side just under the screen. The surface of the back of the screen has a strange (in a good way) rubbery feel, make you assured that the tablet won’t be that easy to slip from your hands. 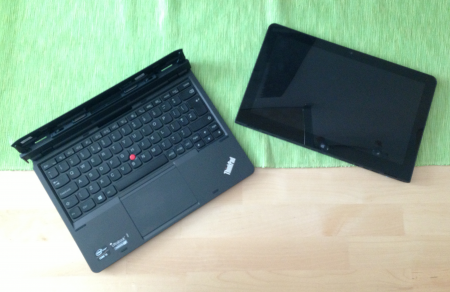 In this tablet mode is it where the new features of Windows 8 come alive the most. All the charms and swipes come so natural this way. The on-screen keyboard is sufficiently large as well and easy to type even longer text.

In the 3rd mode, with the screen attached to the keyboard the other way around, the keyboard provides a kind of stand for the laptop – handy for watching movies or leisure use like games, etc. 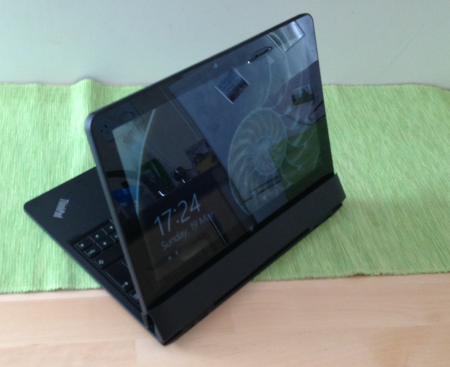 Alternatively, when fully closed, it can be just a bit thicker tablet, but with extended battery life. 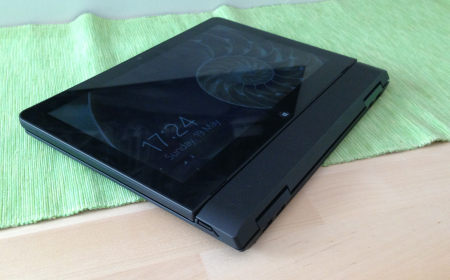 I haven’t talked much about the HW specs, after all this is not supposed to be a HW benchmark test, more like a user point of view test. In short, the model i got came with Intel© Core™ i5 processor, 4GB of RAM and 128 GB SSD disk. At the moment I have just over 60GB free space left, which is not that much considering the 128GB SSD. There is about 17 GB used by recovery partitions, so there might be a way to reclaim that space, but at the moment I’m not stuck for it, so I’ll cross the bridge when i get there. In terms of the noise, when in absolutely quiet room you can just about hear the whisper of the fans, if there any slightest noise in the background, the device is virtually noiseless.

Another interesting feature is that the device has 2 batteries – one in the tablet module and another one in the keyboard. While running on battery, it’s using the power from the keyboard first, keeping the tablet battery charged. I’ll have yet to see how long are the batteries going to last in real world use.

Last but not least I’d like to talk about the software. I’m not a big fan of all that pre-installed crap-ware that some of the makers put on their computers. And even though there was a couple of packages that i removed straight away, the work Lenovo has done on their Support and Settings packages is really nice, and have to applaud them for it. 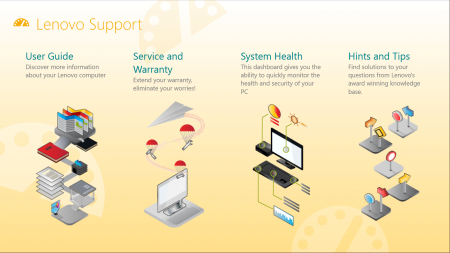 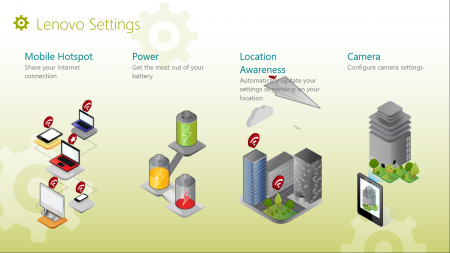 I’ll probably follow this article with another one, see how it goes after a longer period of use. At the moment I’m more than happy with the device. If there was anything negative to say, it would be more of a wish list type of notes. For example I’d like the bezel around the screen to be a bit smaller – i think it’s a bit too wide at the moment. Also I really would like at least one USB port  on the side as opposed to have them all on the back. And lastly the power & volume buttons are a bit awkward to press – they are a bit too small.

Other than these small cosmetic details this looks like a really good device, that i’m looking forward to report on again later on after i get more “milage” with it.